You may have noticed I stopped posting during my time in Cambodia. I stopped because I needed to process the experiences on my own, and there wasn’t space in my head or heart for the blog. But another volunteer, Amanda, has eloquently summed up both the intense beauty and deep challenges of volunteering at Harpswell in this post. I encourage you to read her piece, and as always, leave any thoughts of your own.

One of my first days back in Cambodia after Thailand, I woke up to see the sunrise at Angkor Wat, arguably the world’s largest religious monument, and, understandably, a huge source of pride for Cambodians. 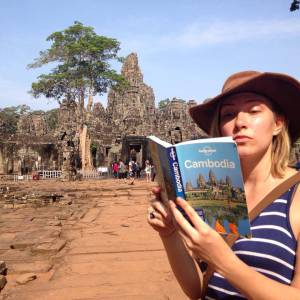 While eating breakfast next to the temple, two kids came up to the table, barefoot, asking my friend and me to buy postcards and plastic souvenirs. They had blank stares as they repeated the same phrase over and over, obviously having said the same spiel 1,000 times. They looked so tired. I asked them their names and they were caught off guard. This has happened lots of times. It happens in NYC, and it happened all over Ecuador when I traveled there. But this specific scenario at the temple meant something different to me now.

A story from Harpswell

One of my students, named Kimlai, grew up…