Violence is rampant in Rio’s favelas.
Art can help.

This is a big topic for the first post in what I hope will become a weekly series about Rio.

I was planning to discuss only lovely things about Rio before I delved into the topic of class wars, but sadly, I couldn’t find much out there about juice bars.

Luckily, there’s this fantastic thing called art that helps the poverty pill go down a little easier. Art helps me process heavy thoughts and harsh realities in a constructive way.

While art cannot help the fact that three young boys were brutally murdered in one of Rio’s most violent favelas for not carrying papers, art can help communities cope with that senseless loss. (I’ve looked for a link to a news article about this particular tragedy, but there are so many acts of violence in the news that this one seems buried.)

JR is a Parisian photograffeur, or street graffiti artist, who photographs marginalized or conflicting groups, such as criminals, women, and family members of those three boys in Rio. He pastes the photos on public buildings as a reminder to everyone who sees them of the subjects’ humanity.

In this TED Talk, JR gives an overview of his work while exploring the question, Can art change the world?

If your internet connection is strong enough, this talk is completely worth the 24 minutes it takes to hear it.

If you can’t listen to all of it, here are a few of my favorite points (best if read in a French accent): 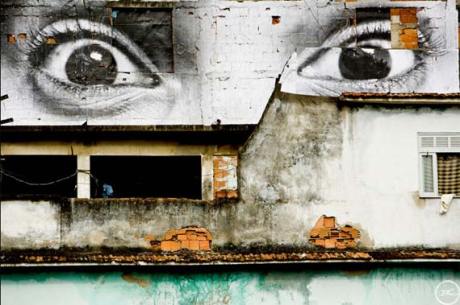 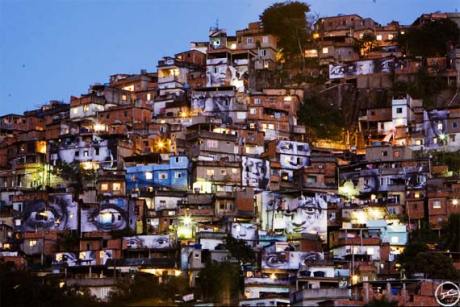 When JR entered Providência, the favela where the boys were from, several community members eagerly approached him to tell their story.

One community member, a victim’s grandmother, allowed JR and his team to paste her image in the place where her grandson was arrested.

The project attracted media attention, but JR remained anonymous. Reporters were forced to seek out the then-anonymous women photographed to hear their perspective on the injustice. (That’s bridging a gap!)

I appreciate the way JR speaks in his talk about the communities he enters. He wants each community to own the work. He doesn’t go into places with a savior attitude; rather, he projects a desire to tell an important story that has been overlooked. He engages people and they respond.

JR came upon this definition of art as he overheard a conversation between two men reacting to his work:

To a man who didn’t understand [JR’s work], another explained: You’ve been here for a few hours trying to understand. During that time, you haven’t thought about what you’re going to eat tomorrow. This is art.

Art is not supposed to change the world, but it can change the way we see the world. Art is a neutral place for exchanges and discussion, and in that way, art changes the world.

Thank you Maggie and Jordan for introducing me to JR’s work!

What are your favorite points from his talk?